“We are nothing without stories, and so we invite you to believe in this one.” From the very first fourth-wall-breaking words of The Wonder, tension bubbles between faith and fact around the very act of storytelling, disparate from truth. In Sebastián Lelio’s psychological drama, it is this power of suspending one’s disbelief that not only poses ethical and spiritual questions, but sets the stage for one of Florence Pugh’s finest performances of her career to date — and that’s the truth.

With A Fantastic Woman director Lelio at the helm, The Wonder stars Pugh as English Nightingale nurse Lib Wright, who is called to a small, devout community in the Irish Midlands 13 years after the Great Famine in 1862. Lib endures a long journey, over sea, through rain, and upon horse-drawn cart to reach a remote village where everyone knows everyone’s business. Her mission is to visit the O’Donnells living beyond the village, and conduct a two-week examination of their 11-year-old daughter Anna (Kíla Lord Cassidy) who claims to not have eaten for four months, surviving only on “Manna from Heaven” she says. Anna is considered to have “lived miraculously” by the “less scientifically minded” members of the village while others aren’t convinced, so Lib needs to determine the truth before it’s too late.

The film is based on Room author Emma Donoghue’s novel which was inspired by the 19th century “Fasting Girls” phenomenon, which saw young women and girls appearing to go for months without food, claiming to survive purely on the power of faith. This clash between science and religious belief lies at the heart of The Wonder. Lib is paired with a nun, Sister Michael (Josie Walker), to whom she may not compare observations or even converse with, which creates tension between Lib’s medical opinions and those of the community. “It’s not your job to question us, Nurse,” warns Ciarán Hinds as Father Thaddeus, the O’Donnell family’s parish priest. “You are here only to watch.” While Anna is referred to by visiting pilgrims as “a wonder,” and essentially worshiped by her own parents, it becomes apparent to Lib that little care for her physical health is being taken by those around her.

Until her understandable breaking point, Lib remains a picture of absolute composure, steadfastly professional and matter-of-fact, attending her duties as a nurse, assessing the situation, systematically checking for clues, and calling it as she medically sees it. Pugh is even able to convey withheld judgment from her young patient as the camera holds her in profile in several scenes — no mean feat for an actor. As a nurse trained by Florence Nightingale in the Crimean War, Lib has seen much death and pain, both in her time during the war and her personal experiences, so is not easily wavered. But in private, Lib conducts a somber ritualistic intake of laudanum (a painkiller mix of opium and high-proof alcohol) to manage her own grief, enacted by Pugh using only firelight to create a poignant chiaroscuro visual for these intimate moments. And in one unforgettable scene, where dark truths are revealed, Pugh’s ability to manipulate and withhold Lib’s horrified reaction is a mark of her incredible talent.

Gender politics also run rampant through the film, moving from the private, female space of the O’Donnells’ home to the public, male space of the tavern and entirely-male town committee — neither Nurse Lib nor Sister Michael are given chairs when facing the seated committee. Men often speak for women during the film, including Dr. McBrearty (Toby Jones) for Rosaleen O’Donnell about her own daughter, or interrupt them entirely to disregard their observations, as Lib is reprimanded by Dr. McBrearty for determining the facts through medical evidence. “You are a nurse. Please, don’t make a diagnosis,” he says. You’re paid to watch, not to intervene. You’re neither the girl’s mother nor her physician. You’re overstepping, madam.” (Notably, Lib uses this misogynist pomposity to her advantage later). It’s this feeling of helplessness, the inability to intervene, that drives Lib to take matters into her own hands, but one that exposes her deep care for Anna when elements of Lib’s professional routine cross her patient’s boundaries.

Featured Video For You

The Power of the Dog cinematographer Ari Wegner wields her Oscar-winning artistry in The Wonder, both capturing private, intimate moments between characters and framing the rugged, bleak beauty of the Irish Midlands with equal magnitude. Wegner’s work is further amplified by British electronic producer ​​Matthew Herbert’s haunting score — if you’ve seen Lelio’s 2017 film A Fantastic Woman, Herbert wrote that brilliant score too.

Alongside Herbert’s score, Lelio creates tension throughout the film by using the power of silence, with only the sound of the bleak, windy moors to be heard within the walls of the O’Donnells farm — a far cry from the boisterous local village pub where Lib takes up residence. Thanks to production designer Grant Montgomery, art director Til Frohlich, and set decorator Margot Cullen, the film’s sparse, historically accurate exteriors and interior decoration of the farmhouse feels immensely practical and used — natural light only comes from the bubbling iron pot in a fireplace and small windows — making you all but forget the set you wandered through at the beginning of the film. And in scenes of Lib’s examination of Anna, often the only sounds present are the sound of fabric shifting, Lib’s requests, and Anna’s fervently whispered prayers.

Even more politically, Lelio and Wegner present several scenes throughout the film lingering on Lib, who is English, taking a meal, silently stewing over case details while consuming the modest meals placed in front of her. In contrast, over the course of the film we watch Anna, who is Irish, as her health depletes due to self-induced starvation. As the film’s opening voice over explains, “The Great Famine still casts a long shadow, and the Irish hold England responsible for that devastation.” It’s this lasting impact of the effects of The Hunger on Ireland, and England’s oppressive role in it, that continues through the film, including those who lost loved ones during this period of starvation and disease between 1845-52. 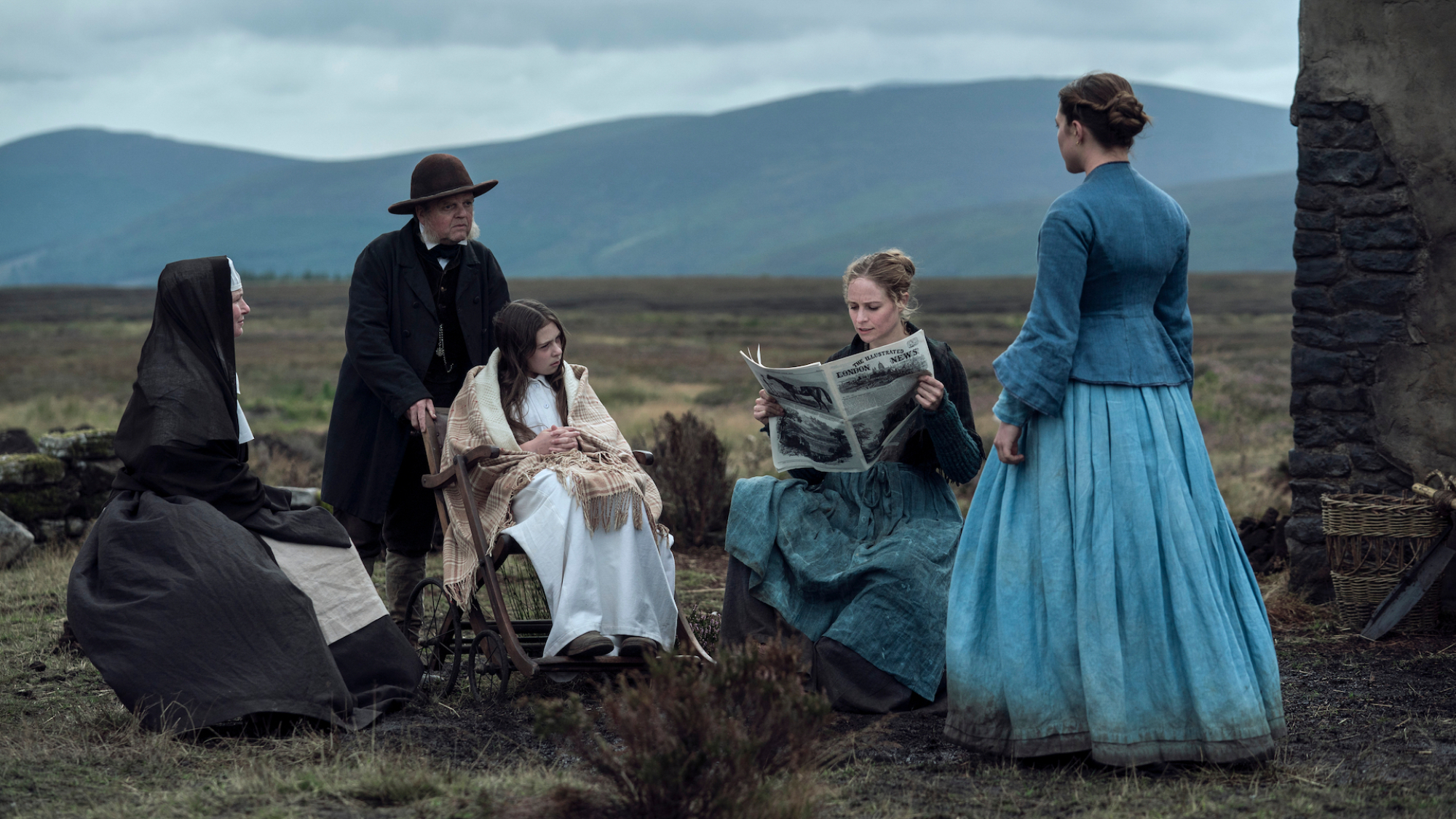 Lelio uses the classic cinematic fourth-wall breaking technique to hammer home the nature of stories and the necessity for such tales. From the very first moments, the audience is moved through the set by Wegner, much like we saw in Landscapers. “The people you are about to meet believe in their stories with complete devotion,” we’re told in voice over. The audience is reminded of this level of fourth-wall breaking mid-way through the film, as Kitty O’Donnell (Niamh Algar) stops digging up turf to stare down the camera, as Pugh’s voiceover reiterates, “We are nothing without stories.”

After a year of stories running rampant around Pugh’s other work, The Wonder cuts through the noise with a hushed power, presenting an intense, poignant, and deeply moving examination of faith, science, grief, and the dangers of extreme piety at a terrible cost.

The Wonder is now showing in cinemas and streaming on Netflix.

The NLRB says Apple interrogated and coerced employees in Atlanta